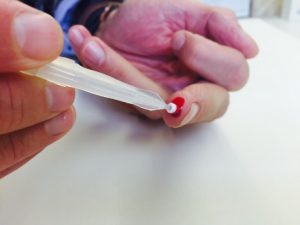 Sakhi et al. (2015) talks about the feasibility of using self-sampled dried blood spots (DBS) as a substitute for blood samples collected by venipuncture in population studies. Invitations, instructions and DBS collection kits were sent to 4600 Norwegian women without prior notification.

More than 70% returned the DBS cards, with the majority (93%) being packaged and shipped correctly. Three quarters of these were filled with blood according to the instructions and sample quality was consistent with previous reports.

The successful use of DBS was confirmed in a separate study by Food4Me. In this EU-funded FP7 research project, a similar approach was used with 1600 participants and achieved the largest web-based, personal nutrition intervention study to date.

The findings by Sakhi et al. (2015) and results from Food4Me study indicated that DBS provide a low cost and effective alternative for biomarker analysis. Tracking devices, such activity bands, smart watches, and integrated health apps such as Apple Health, are already well established for pulse and blood pressure. Now, efforts are being made to integrate blood glucose measurements into such devices. The trend for self-tracking would benefit hugely from measurement of other biomarkers obtained at a personal level using, for example, DBS.

For reliable nutrition and lifestyle advice, DBS analysis has to be linked with scientifically valid data and knowledge rules, such as those provided by Quisper®. Obtaining nutritional status and tracking changes in lifestyle biomarkers in response to eating habits and important lifestyle factors (e.g. exercise) are instrumental in motivating individuals and documenting effects.